Blair Warner
Lisa Whelchel is an American television actress, singer, songwriter, author, and speaker. possibly best known for the role of Blair Warner on "The Facts of Life."

Born in Littlefield, Texas, USA on May 29, 1963. Lisa Diane Whelchel is the daughter of James "Jimmy" and Virginia "Genny" Whelchel. Her parents divorced in 1981, but her mother married again in 1983. Raised in Fort Worth, he has a younger brother, James Whelchel, and a younger half-brother, Casey Coleman.

Lisa was discovered acting at age 8 and performed in musical theater for the next four years. At 10, she became a born-again Christian and devoted her life to her Christian faith. Two years later, she wrote to Disney Studios asking for an audition as a Mouseketeer on "The New Mickey Mouse Club" and moved to California the next year and appeared in syndication from 1977 to 1978.

In 1979, she landed the role of Blair Warner on "The Facts of Life." Lasting nine years, the project was a major accomplishment in her life, leading to two movies, The Facts of Life Goes to Paris and The Facts of Life: Down Under. Between episodes and seasons, she starred on "Diff'rent Strokes" (as Blair) and two roles on "The Love Boat." She also made the movies, "The Double McGuffin," "Twirl" with Erin Moran and " The Wild Women of Chastity Gulch."

After the series ended, Lisa married pastor Steven Cauble, and they had three children Tucker, Haven and Clancy, choosing to home school her kids. Devoted to music, she released a Christian pop album, "All Because of You," in 1984, which was nominated for a Grammy Award for Best Inspirational Performance. She has written several books about motherhood and home schooling, including "Creative Correction," "So You're Thinking About Homeschooling" and "The Facts of Life (and Other Lessons My Father Taught Me)" among others. In 2001, she played Blair again in "The Facts of Life Reunion" for the ABC Network. She was also reunited with Charlotte Rae to performed "The Facts of Life" theme song at the Second Annual TV Land Awards. On Thursday, April 10, 2011, Whelchel and the cast of The Facts of Life to be honored with the Pop Culture Award at the 9th Annual TV Land Awards at the Javits Center in New York City.

After her divorce in 2017, Lisa appeared on the 25th season of "Survivor" filmed in the Philippine Islands, even promoting her appearance on "The Talk." (2010), For the 25th Season Reunion Show on CBS, she won the fan-voted Sprint Player of the Season by the closest margin of victory in "Survivor" history. She also began to co-host on "The Jeff Probst Show ."

That same year, she started hosting "Collector's Call" on MeTV. She is also a trained ventriloquist and a licensed pilot. 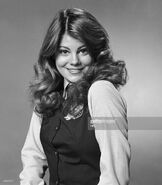